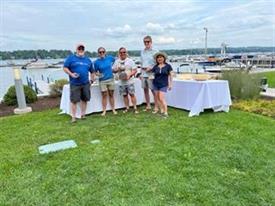 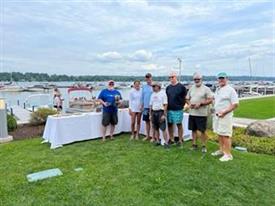 The annual All Lake Regatta, hosted by the Skaneateles Country Club was held on Saturday, September 3rd. 16 boats from throughout the Skaneateles community were on the starting line at 2:00pm. Winds at the start were out of the South South West at about 10 knots and dropping, making for a challenging race.

Traveling from Furthest Away:  Walter Rogers from Widewater

In 1854, the first sailing club took to the waters of the lake: The Skaneateles Model Yacht Club, “a model of excellence.” Its time was short; the club held its last race in 1857. Decades later, the Skaneateles Yacht Club was formed. In 1905, it held a race followed by a shore dinner, which proved more popular, and soon the “Yacht Club” was land-locked and concentrating on clam feasts and smokers. Organized sailing returned to the lake in 1931, when the Skaneateles Sailing Club was formed with E.N. Trump – a founder and the first President of the Skaneateles Country Club – as its Commodore. The new club held its first regatta on Labor Day. In 1933, its sailors joined with our golfers, and in 1935 the Skaneateles Country Club hosted its first regatta.

A fully staffed Sail School is offered to our members and the community ages 7-18 during six summer weeks using Club owned sailboats. Our Sail School Program includes on the water drills and games, boating safety, boat rigging and care, knot tying, capsize and rescue, and racing. Sailboat racing enthusiasts may participate in a season long race series or periodic regattas hosted by the Club. Private evening and weekend lessons are also available. Our Sailing Program has something for every level of sailor.